5 Cuts Your Business Should Consider Before Laying Off Staff

Wouldn’t it be nice if you could provide your staff an over-the-top benefits package similar to what Google offers their employees (aka, “Googlers”)? For most SMBs, making Glassdoor’s annual list of “50 Best Places to Work” (a list routinely dominated by Google) is a fantasy; primarily due to the fact that the average enterprise operates 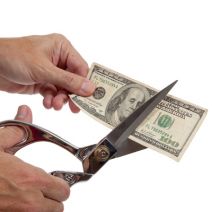 Wouldn’t it be nice if you could provide your staff an over-the-top benefits package similar to what Google offers their employees (aka, “Googlers”)? For most SMBs, making Glassdoor’s annual list of “50 Best Places to Work” (a list routinely dominated by Google) is a fantasy; primarily due to the fact that the average enterprise operates within the confines of a strict budget. As the owner of an SMB, this reality often means making tough decisions and budget cuts.Of course, Google doesn’t have this problem. For the fun of it, let’s take a look at just some of the perks that Google bestows upon its Googlers. As reported by Inc:

Now, don’t be too down on yourself for not having a Google-caliber company, or even for not choosing a career path that would have made you a Googler. Instead, you’re a proud small business owner, and as such, you face the challenge of dealing with limitations and day-to-day stresses, like what expenses get cut when times are lean. When making inevitable budget cuts, you have to be smart and go about it in such a way that you only cut the fat while leaving employee morale intact. If you have to do some cutting, here are five recommendations.

Ridiculously Priced Company Parties
Throwing an extravagant party for your employees comes with benefits like increased loyalty and an all-around good time had by all. However, if your company is on the brink of financial instability, it might be better to just have a small get together with some pizzas.

One tech company taking flak for not abiding by this common-sense rule is Yahoo. After recently posting massive losses and laying off 15 percent of their staff, Yahoo moved forward with their plans to throw a $7 million “Great Gatsby” themed party last December. You can imagine the irritation of Yahoo’s investors when they found out about the party (especially if their invitations “got lost in the mail”). Meanwhile, a reasonably-minded Yahoo employee would have a difficult time enjoying the party’s jazz orchestra if they recently saw their co-workers lose their jobs and believed their own position to be on the chopping block.

Free Food and Snacks
One easy way to make the office more enjoyable is to provide employees with free food and snacks. However, if money becomes tight and you choose to keep the snack train going over keeping a loyal worker employed, then the free food will lose its flavor as employees become worried about losing their jobs. Similar advice to the previous example, if you communicate to your workers that times are tough and you’ve made the decision to cut back on food instead of cutting jobs, they’ll appreciate the honesty and won’t gripe about losing the perk.

High Executive Salaries
It’s just plain unethical for an executive to raise their salary when the ship is sinking. A recent example of this dastardly deed comes from Viacom’s CEO Philippe Dauman who recently gave himself a raise of 22 percent ($54.2 million per year, up from $44.3 million), despite the fact that Viacom’s stock prices slid by 39 percent last year, which inevitably caused layoffs. Granted, the owner of an SMB isn’t in the same position as Dauman, however, every business owner needs to be sensitive of their actions if times are tough and jobs are on the line. For example, if you just made a round of job cuts, then you should probably delay buying yourself that new midlife-crisis sports car.

Expensive Office Space
Every business owner wants the status and prestige that comes with having a high-profile office space. But if you can’t afford it, then you can’t afford it. Inc. recommends moving operations to a more economical space if need be:

If you have a lease on expensive office space, you may need to look into whether it is possible to break the lease and move to less expensive space. This could be a major disruption to your operations — but over the long-run most companies do not need fancy office space to do the work that customers expect in order to reward you with their business.

Get Your Technology Assessed By K² Technologies
All of the previous examples are cuts that are very visible. If you need to implement some money-saving changes, then you’ll first want to do it in a way that won’t broadcast your company’s financial situation. To that end, you may be surprised to learn that your IT infrastructure is set up inefficiently, causing massive losses in both revenue and productivity. By having K² Technologies assess your network and implement money-saving solutions, you’ll gain a more efficient IT system that will save you money. Unlike making tough budget cuts, this is a major business decision that’s easy to make.

Call us today at 307-686-3025 for a free IT assessment, and in the comments below, help out your fellow non-Googlers by sharing ways that you’ve kept your organization going during times when money was tight.

END_OF_DOCUMENT_TOKEN_TO_BE_REPLACED

END_OF_DOCUMENT_TOKEN_TO_BE_REPLACED
If you’re thinking about outsourcing your IT, please read this first.